Monovision is a term used to define the vision when one of the eyes (generally the dominant eye) is able to see well at long distances & other eye is able to see comparatively better close-up due to its nearsighted. Some of the patients originally have monovision where one of the eyes has no prescription & the other eye is nearsighted. Other nearsighted patients will be completely correct only one eye to allow other eye to see better at nearby distances.
Nearsighted (myopic) patients generally see better close up at compared to distance. Farsighted (hyperopic) patients can view better at distance when compared with close up, but all the distances may be blurry.  Patients who are suffering with astigmatism may be blurry at any distance. Presbyopic patients are over the age of 40, and generally require reading glasses or bifocals for the near vision. Monovision LASIK procedure may be an good choice for all of these type of patients.
During monovision LASIK procedure, nearsighted patients will only receive the full correction on the dominant eye & partial correct the non-dominant eye, by that the non-dominant eye will remains slightly nearsighted to the aid with the near vision. In some of the cases where the preoperative prescription is suitable, no correction is needed for the non-dominant (near) eye. In this type of cases only the dominant eye is corrected for distance. 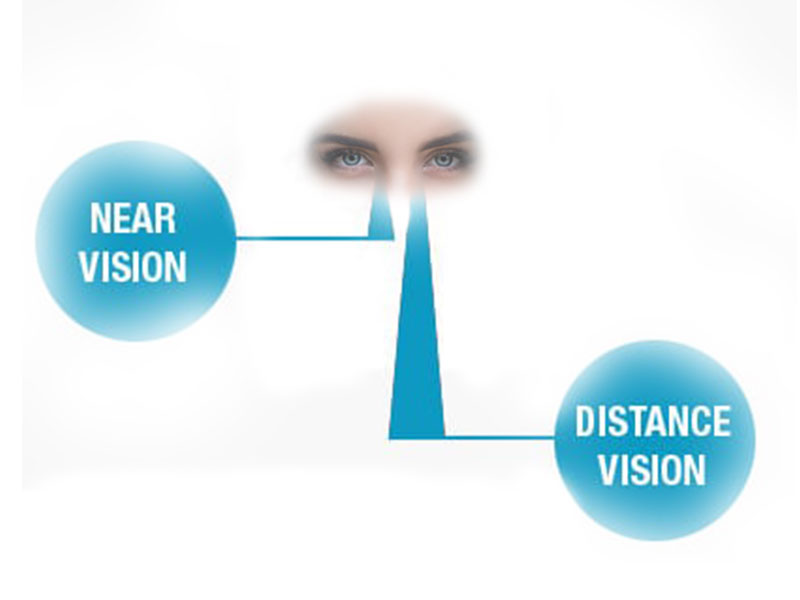 Regardless of age, most of the patients will prefer to have both the eyes corrected for distance, as this will provides the best quality of the distance vision & stereoacuity. Stereoacuity (it is the ability to perceive 3 dimensional spatial relationships in the vision) may be adversely affected by the monovision as the 2 eyes are not in the focus together. Pilots, tennis players, professional drivers, golfers & skiers are generally better off when they have both of the eyes were corrected for distance. Some of the monovision patients will find it more complex to judge the distances, or descend curbs or stairs.
For the right patient, monovision will be an option to consider. If you are older than 45, it would prefer the clearest possible distance vision & would not mind wearing the reading glasses, we recommend by correcting both of the eyes for distance, we won’t recommend for monovision LASIK surgery. But if you are over the age of 45 & you would not mind trading for some distance clarity in the exchange for a lessened dependence on the reading glasses, monovision LASIK procedure may be an option for you.