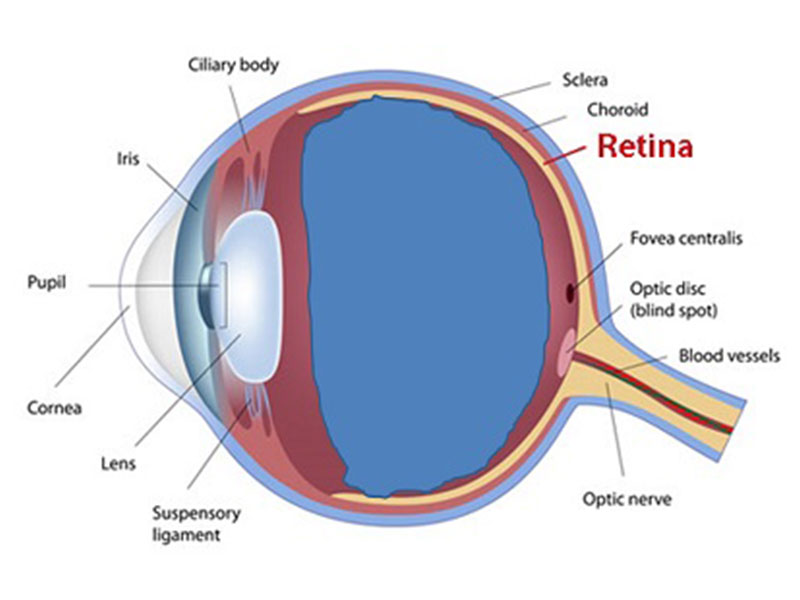 The retina is a thin layer of the tissue which lines the back of the eye on the inside. It is situated near the optic nerve. The purpose of the retina is to receive the light which the lens has been focused, converts the light into neural signals, & also send these signals on to the brain for the visual recognition.

The retina is a light-sensitive layer positioned at the back of the eye which covers nearly 65 % of its interior surface. The only neurons which are directly sensitive to the light are the photoreceptor cells. Photosensitive cells known as rods & cones in the retina converts incident light energy into the signals which are passed to the brain by optic nerve. Rods function mostly in dim light & also provide black-and-white vision, while cones support daytime vision & the perception of the color. In the middle of the retina there is a small dimple known as the fovea or fovea centralis. It is the center of the eye's sharpest vision & the location of the most color perception. A third, much rarer type of the photoreceptor, the intrinsically photosensitive ganglion cell, is significant for reflexive responses to bright daylight. The retina is a layered structure with many layers of neurons which are interconnected by the synapses.

The retina, processes light by a layer of photoreceptor cells. These were essentially light-sensitive cells, which are responsible for the detecting qualities like as color & light-intensity. The retina processes the information collected by the photoreceptor cells & also sends this information to brain from the optic nerve. Generally, the retina will process a picture from the focused light, & the brain is left to decide what the picture is. Because of the retina's vital role in the vision, damage to it may cause permanent blindness. Conditions like retinal detachment, where the retina abnormally detach from its original location, and obstructs the retina from receiving or processing the light. This prevents the brain from receiving the information, therefore leading to the blindness.