Farsightedness, or hyperopia, was a vision condition in which the distant objects will be visualize clearly, but close ones won’t come into a proper focus. Farsightedness will happens when eyeball was too short or the cornea is having too little curvature. By the result of the above cases, eye cannot properly focus on the light which enters it. Correction was generally achieved by the usage of convex corrective lenses. For the near objects, the eye needs to accommodate even more. Based on the amount of hyperopia & the age of a person which directly relay to the eye's accommodative ability. 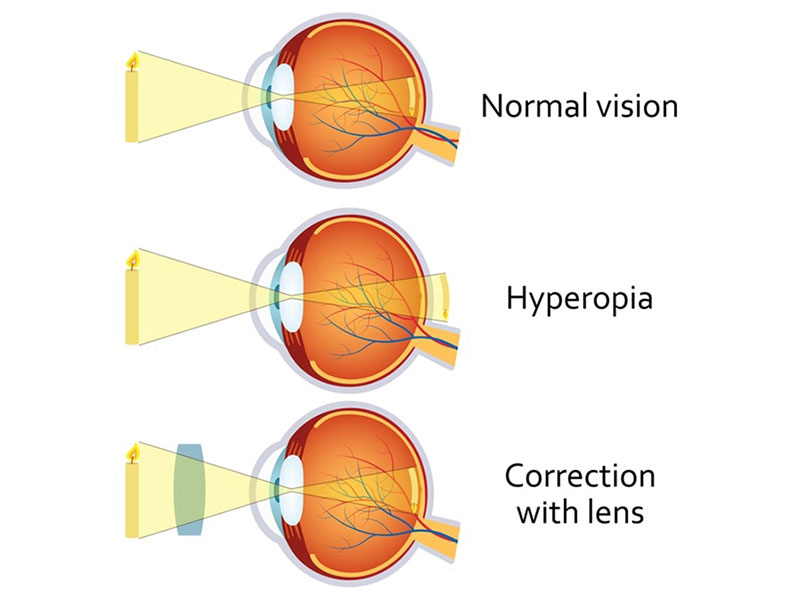 Most common symptoms of hyperopia involves difficulty concentrating & maintaining a clear focus on the near objects, fatigue and/or headaches after doing a close work, eye strain, aching or burning eyes, & nervousness or irritability after sustained concentration. The most common symptom was 'tiring' of the eyes (asthenopia). Difficulty of seeing with the two eyes (binocular vision) can occur, as well as, difficulty with the depth perception.

Hyperopia was mainly caused by 2 reasons:

Farsightedness was usually occurs from the birth, but the children have very flexible eye lens, which will helps to make up for this problem. In rare instances hyperopia will be occurs because of diabetes, & problems related to the blood vessels in the retina.

The diagnosis of hyperopia may be performed by a silt-lamp test. In this test examination of the cornea, iris and conjunctiva, a yellow dye was used to help examine the cornea. Other test will be done which includes:

In severe cases of hyperopia from the birth, the brain will have difficulty with integrating the images which each individual eye sees. This was due to the images the brain which receives from each eye will be always blurred. A child who is suffering from severe hyperopia won’t view the objects in detail. If the brain never learns to view the objects in detail, then there will be high chances of condition where one eye becoming dominant. The result was that the brain will blocks the impulses of non-dominant eye. In contrast, the child suffering with myopia may see the objects close to the eye in detail & does learn at early age to see detail in the objects