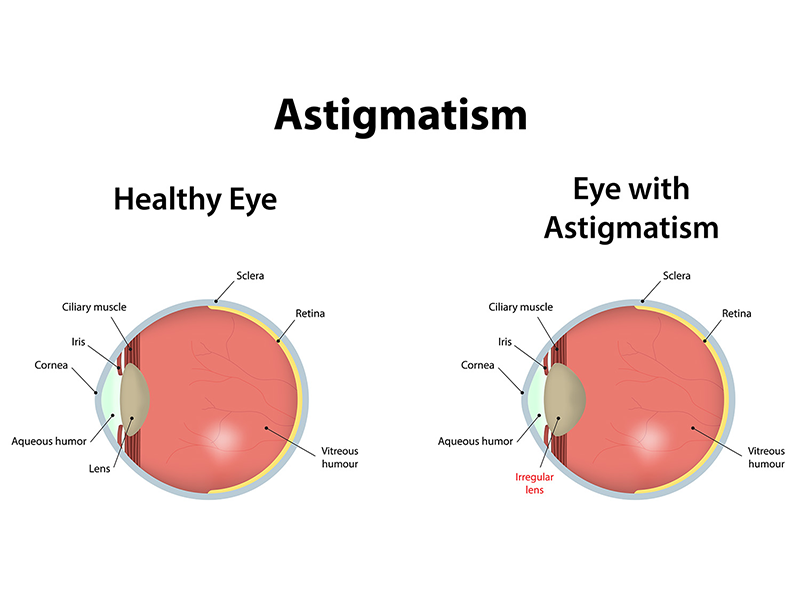 Astigmatism was a common vision situation which causes a blurred vision. It will occurs when the cornea was irregularly shaped or occasionally due to the curvature of the lens inside the eye. An irregularly shaped cornea or lens will prevents light from focusing properly on the retina, the light-sensitive surface at back of the eye. By this, vision will becomes blurred at any distance. This may leads to eye discomfort & headaches. Most of the people will have some degree of astigmatism. Slight astigmatism generally doesn't affect the vision or won’t require any treatment.

Astigmatism was generally the result of an irregular-shaped lens or cornea. The cornea was the transparent layer of a tissue which was at the front of the eye. The cornea will be regularly curved like the surface of football, but in the situation of astigmatism it will be irregular curve, more it will look like a shape of rugby ball. Which means light rays entering the eye won't focus properly, and thereby creating a blurred image.
In many cases, astigmatism was present at the birth time. Even though, sometimes it may develops after an eye injury or as a complication occurred after an eye operation.
Astigmatism may also occur because of a relatively rare condition known as keratoconus in which the cornea will becomes gradually thinner & cone-shaped. This may results in a large amount of astigmatism, which will cause poor vision which will not be clearly corrected with the help of eyeglasses. People with keratoconus generally require contact lenses for the clear vision & ultimately needs a corneal transplant.

People with undetected astigmatism often have blurred vision which can be associated with fatigue and eyestrain. While these symptoms may not necessarily be the result of astigmatism, you should schedule an eye exam if you are experiencing one or more symptoms.

Most of the people who are suffering from astigmatism were born with this condition, so it's essential that your children should have regular eye tests. If vision wasn’t regularly tested, conditions like astigmatism will remains undiagnosed for so many years, which may cause a lazy eye.
Various tests can be performed to diagnose astigmatism. The 2 most common tests are the visual acuity test & the keratometer test.

A visual acuity test will be used to evaluate your child's ability to focus on the objects which are places at different distances. It generally includes reading letters on the chart known as Snellen chart. The letters will become gradually smaller on each line of the chart.

A device which is called as keratometer it will be used to measure the degree of corneal astigmatism. It will measures how light was being focused by the cornea & will also detect irregularities in the curve of the cornea.
Almost all degrees of the “normal” astigmatism will be corrected with a accurately prescribed contact lenses or eyeglasses. For a person with only a minor degree of astigmatism, corrective lens is not required at all, as long as other conditions, like nearsightedness or farsightedness, are not present. If the astigmatism was moderate to high corrective glasses or contact lenses were possibly needed.